When Elma Kamonong High School opened in 2015, the EBCCK Board of Directors was fortunate to be able to encourage Mr. Richard Keter, a former school administrator, to step away from his retirement and take on the task of opening our new high school. We benefited from the blessings of his experience for five years, as the school grew from one class of form I students to a full school with close to 120 students. When it came time for Mr. Keter to return to his well-deserved retirement, the EBCCK BOD interviewed many candidates, looking for the right leader to take the school on the next phase of its journey to excellence.

We are delighted to report that the perfect choice turned out to be our own Henry Ouma. heretofore known as Mr. Ouma, in deference to his new position of responsibility. Dr. Carol Saunders began her sponsorship of Henry even before Walindwa was founded, after one of her trips to Kenya.

Henry attended N’gambo High School, where his good grades earned him a position at the best university in Kenya, the University of Nairobi. He studied for a Bachelor of Education with specialization in History, Political science and Kiswahili, and graduated in September 2017. Henry relates, “Even though my childhood ambition was to be a lawyer, I somehow fell short of the required grades for enrolling to Law School. I always feel that God had wanted me to be a teacher because throughout my teaching career I have made a difference in the lives of many children.” After completing his teaching degree, Henry decided to return to Elma Barnett and help his younger brothers and sisters from the Children’s Centre who had begun high school at Elma Kamonong High School, which had not existed during his high school years. Teaching there was very fulfilling to me,” Henry reveals. “Apart from being the very first school that I had taught at as a qualified teacher, it was a big pleasure teaching children from the Children’s Centre who saw me as a role model and, through me, developed a sense of belief that they too will become respected men and women someday.” The hunger and desire to gain more experience in his profession led him to resign from EKHS and join Baringo High School in Eldama Ravine, Baringo County. Here he was able to inspire students who thought they could not get good grades to perform well. Most of them still appreciate and recognize his good work to date, which is the joy of teaching and inspiring lives.

After eighteen months at Baringo High, Mr. Ouma felt that he had not completed the purpose of God for him, with regards to Elma High School. Coincidentally, this is the same time that Judy Birir, a Director of EBCCK, approached him and asked if he would be interested in becoming the successor to founding Principal Mr. Richard Keter.

Mr. Ouma is committed to make this school be one of the best schools in Kenya. “I sincerely thank every person who has committed his or her resources to make this school a good school. We have spacious classrooms, a science center, a dining hall and a Library & Tech Centre that is nearly complete. Every time I see the facilities in this school, I sigh and say surely, God is good.”
Going forward, Mr. Ouma and the EBCCK BOD are working on improving the quality of learning and teaching by hiring very competent teachers and enrolling students who are committed to studying hard and achieving their goals. Henry believes that in the next two-to-three years, this school will be performing well in the national examination and attracting students from all over the country. “I am committed and dedicated to making this happen. I trust that GOD will give us strength, health and wisdom to make it the most desired institution for learning. On a personal level, I hope and pray that I will be able to enroll for my postgraduate studies and pursue a cause in Educational management and leadership, so that I will expound my scope of knowledge on matters of administration.”

Please join us in welcoming Mr. Henry Ouma as the new Principal of Elma Kamonong High School and supporting him and the 2021 students with your prayers. 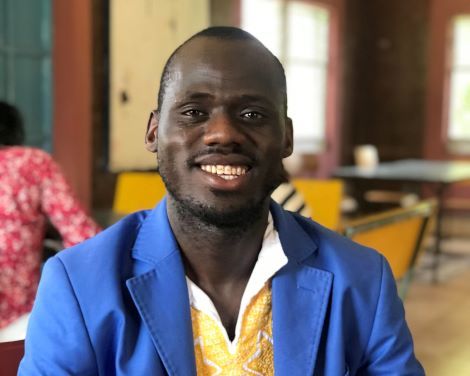